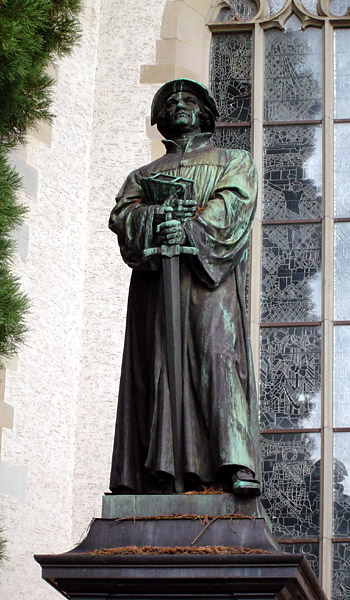 Let me begin by reminding us that we must all agree that the Bible makes a distinction between the realm of government and the realm of the church. A government has the right to protect its borders, to declare war under certain circumstances, and to defend itself with the sword. A government should be compassionate when it can, but compassion cannot be the policy upon which it governs its affairs. As Paul said, “the magistrate bears not the sword in vain.”

Huldrych Zwingli should not be faulted for bearing a sword, but in the opinion of Martin Luther, he used it for wrong purposes. Zwingli rallied a Protestant army to fight against the Catholics when they were coming against Zürich. He was killed in the battle and his body quartered. Luther believed he got what he deserved. In Luther’s mind, no Christian should engage in a religious war. Religious wars must be won or lost on our knees.

However, Luther did believe that if civil authorities asked you to go to war, you should. In other words, you can use the sword to defend your country, but not to defend your religion (or the cross).

In the midst of this debate were the Anabaptists (“rebaptizers”), who were pacifists, and refused to take up the sword for any cause. You will remember them from my previous blog.

The Bible and the sword. God and country. The cross and the flag.

These are controversies that will always be with us. We must wrestle with these matters by reading the Bible and coming to conclusions that satisfy our conscience.

Next time I will introduce you to Martin Luther, the great Reformer who changed the history of the world.