If the drama of redemption were a play, it would have two acts, the Old and New Testaments. The central theme is that of a sacrifice. In Act 1, animals were killed at a temple in Jerusalem. In Act 2, the real sacrifice is revealed, the one that takes away sin forever. 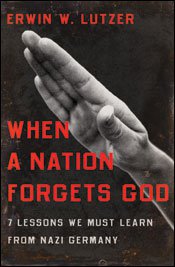 The people of Nazi Germany weren’t any more barbaric, uncivilized, or depraved than any other Western nation of the early twentieth century, yet the Nazi regime will forever serve as an example of brutality and extreme racism. What led so many people to such extreme ends?

According to Pastor Lutzer, the German people’s progression from civility to barbarity was not extraordinary, and more than a few benchmarks from their transition can be observed in present day American society. (Do any of these sound familiar?)

This short, manageable book does not suggest the United States is definitely marching toward authoritarian oblivion, but that we—especially we believers—must be vigilant in our stand for truth, justice, and righteousness.

This paperback book contains 148 pages and is our thank you for your gift.