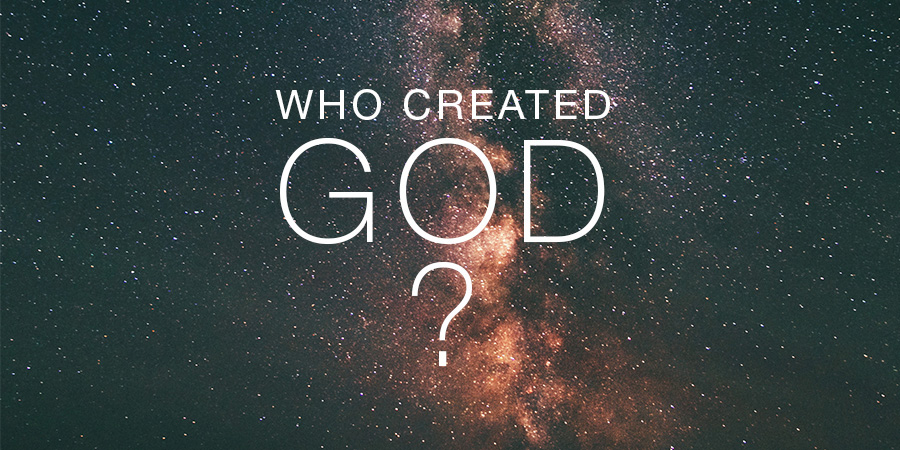 As a boy I was taught that God created the world, but I would look at the stars and wonder, who created God? I was told that God was not created; He existed from all eternity. I’ve pondered that idea many times throughout the years, but I find myself on the edge of a great mystery.

So as best we can, let’s discuss: Who created God?

Some people use this question as an argument for atheism. Here’s the argument: Creationists say that the cosmos is so complex it must have been created by God, but if that’s true, it must mean that God, the Creator, is even more complex than the cosmos. So if the cosmos needed a creator, surely this higher class being called God needed a creator! To put it differently, if it is improbable that the cosmos exists without a beginning, it is even more improbable that God exists without a beginning. So, why believe in this highly improbable God?

Let’s break down this argument and see if we can get some clarity on the subject.

Follow me carefully here. When I was in Bible college, one of our professors gave this argument for the existence of God:

Every event has a cause.

The universe is an event.

Therefore, the universe has a cause. (And, of course, he said that cause was God).

Atheists looking at this argument respond by saying that if we believe every event has a cause, it follows therefore that God must have a cause.

Distinguishing the Physical from the Spiritual

So how do Christians respond? Christians clarify the first premise by saying that the idea that every event has a cause is true only in the observable, empirical world. There is no reason to believe that it applies to the invisible, spiritual world.

In other words, in the empirical, observable world every event has a cause, but we should be hesitant to impose such laws on the unseen, spiritual world. Physical laws are for the physical world and do not apply beyond it. So, God does not need a cause.

Edgar Andrews, of the University of London England, an international expert on the science of large molecules, writes this in defense of God’s existence:

“Because cause and effect is only proven for the physical world, we can no longer insist that cause and effect are relevant when it comes to the origin of a spiritual entity like God. Therefore God doesn’t have to have a cause—he can be the ultimate uncaused cause, a being whom no one has made.”(1)

Who created God? That’s like asking, who created the uncreated one?(2) Christians affirm that God is the uncaused cause of all things. Back in Bible college I memorized this definition, “God is the infinite and perfect spirit in whom all things have their source, support, and end.”

“Lord, you have been our dwelling place in all generations. Before the mountains were brought forth, or ever you had formed the earth and the world, from everlasting to everlasting you are God,” (Psalm 90:1, 2).

What can we know about God? He has told us something about Himself in nature, for “the heavens declare the glory of God,” but we’d like Him to be more specific. There is convincing evidence that He personally visited our planet in the person of Jesus Christ who had both a human and divine nature. Jesus came for the express purpose of reconciling us to God—a feat we could never accomplish on our own. The barrier of sin is so heinous to God that our good deeds can never compensate for our infractions. Jesus, by paying for our sin on the cross, cleared the way for reconciliation. What is more, He affirmed, “He who has seen me has seen the Father.”

Before this Father, the uncreated and eternal God, we humbly worship.