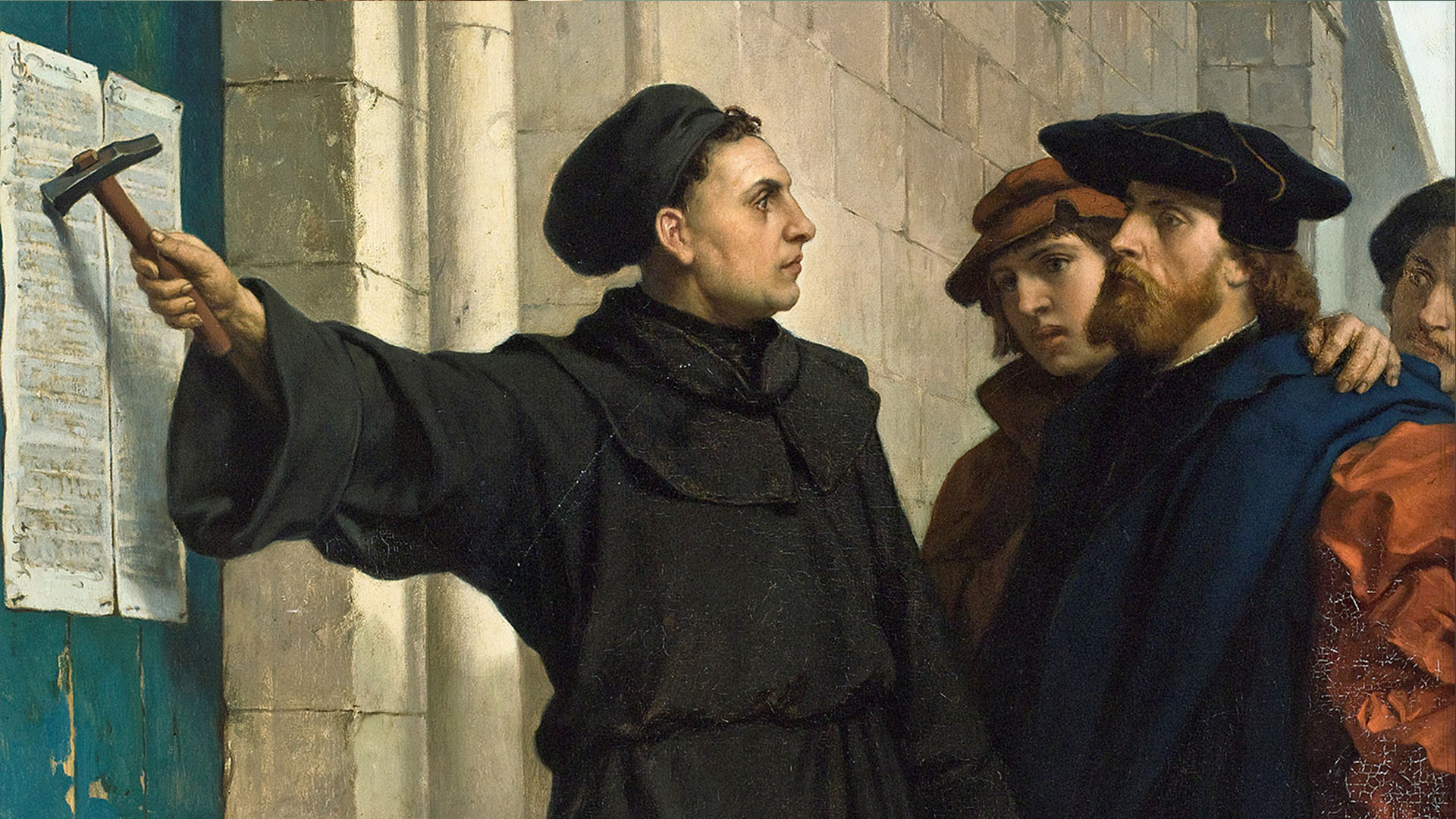 Happy Birthday to the Reformation

On October 31, 1517, Martin Luther nailed his Ninety-five Theses to the door of the Castle Church in Wittenberg, Germany. He didn’t know he was beginning a movement that would still be celebrated 500 years later. Like a man who pulled a stone out of a mountain and began an avalanche, this simple act exposing some of the abuses of the church began a chain of events that has affected us all, whether Protestant or Catholic.

These theses were originally written in Latin but were quickly translated into German, and thanks to Johannes Guttenberg’s invention of the printing press, were soon spread throughout Germany. Most Germans agreed with Luther that the church was badly in need of reform. In the previous century, two popes had ruled simultaneously for a time; for several more years three ruled, each claiming to be the legitimate heir of Peter, each condemning the other and trying to raise funds to defend their claims. Pope Leo X’s decree to raise money by selling indulgences—not just for the living but for the dead—was the last straw for Luther.

How did Luther’s followers become known as Protestants? We must understand that Europe had accepted the dictum “one faith, one king, one law.” The religion of the King was to be the religion of his subjects. With the quick rise of the Lutherans, ardent Catholic Charles V had to allow Lutheran princes to rule over some territories. At the second Diet of Speyer in 1529, he decreed that Lutherans who lived in Catholic areas could only practice their faith if they moved into an area ruled by a Lutheran prince. However—and this was the issue—Catholics could continue to practice their faith even in Lutheran areas. The Lutherans “protested” this unfair ruling and hence became known as Protestants.

Is the Reformation over?

In recent years there have been many meetings and dialogues to explore whether the breach that occurred 500 years ago can be repaired. Of course, both Protestantism and Catholicism have changed in many ways, and we can be thankful that the rancor that existed centuries ago is gone. But—and this is critical—two different answers are still given to the central question of how a sinner can stand as righteous in the presence of a holy God. The Reformers insisted—rightly, in my opinion—that salvation is a free gift given to those who acknowledge their sin and come empty-handed to receive salvation. This free offer of divine righteousness is a declaration that we are righteous in God’s sight, based exclusively on Christ’s merit. As Luther said in the Heidelberg Disputation, “The law says, ‘Do this,’ and it is never done. Grace says, ‘believe in this,’ and everything is already done.”

What is our contribution in salvation? We bring only our sin; Jesus gives us His righteousness in response to simple faith. That message changed much of Europe 500 years ago and has not lost its power to change lives today. We must continue to point our confused world to Christ, who alone can bring us all the way into our Father’s presence.

Many of us are praying for a new Reformation, which is desperately needed in America. The Reformers did their duty as they saw it, and we are heirs to their legacy. Refocusing on the need for the gospel is our most urgent task. Temptations to be sidetracked are many, but we must return to making “the main thing the main thing.” After all, the gospel—the power of God unto salvation—is our most precious possession.