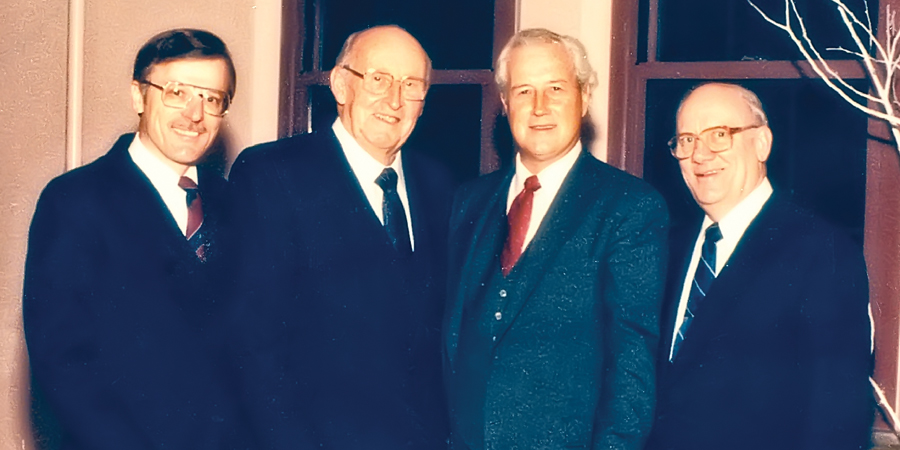 Dr. Warren Wiersbe, known as “the pastor’s pastor” and a trusted Bible teacher and writer, died yesterday in Lincoln, Nebraska at the age of 89. Most people will remember him for his many books—at least 150—while others will remember him for his solid, practical Bible teaching on the Back to the Bible radio program, or his seminars on Sermon Preparation at Trinity Evangelical Divinity School and Dallas Theological Seminary. The list of his accomplishments is long.

Wiersbe was a wordsmith par excellence. He called himself a bridge builder, filling leadership roles in times of need and transition. His grandson, Dan Jacobsen, in a tribute to his grandfather, expressed it beautifully: “His preferred tools were words, his blueprints were the Scriptures, and his workshop was his self-assembled library.” He was master at outlining, writing, and speaking in ways that were engaging, heartfelt, and relevant. His Be commentary series encompasses all the books of the Bible and has been translated into many different languages, selling millions of copies worldwide.

I, personally, remember him for a different reason, namely for the role that he played in my becoming the Senior Pastor of The Moody Church. There is a story here that I have often told, but it deserves retelling so that God’s gracious providence might be on display.

On April 3, 1977, I preached my first message from the pulpit of The Moody Church. I hadn’t intended to preach anywhere that Sunday morning. The previous Sunday, Rebecca and I had said farewell to the congregation of Edgewater Baptist Church in Chicago so that I could study during the summer and begin teaching full-time at Moody Bible Institute. So the next Sunday, Rebecca suggested we go to The Moody Church. After letting her and our two children off at the LaSalle Street door of the church, I began looking for a parking place. The street was filled with cars as far as the eye could see. To my delight I saw a man cross the street in front of me, get into his car, and drive off. I was gratified that I had a parking place just a hundred feet from the church door.

I found Rebecca in the church lobby, and to my surprise, Dr. Wiersbe walked past with his coat on.

“Wiersbe, where are you going? It’s about ten minutes before the service.”

“Erwin Lutzer! I’m sick, I’m on my way home. Will you preach for me this morning?”

And so it was that the very first time Rebecca and I attended a service at The Moody Church, I ended up preaching. That event was the first link in a chain of events whereby, less than three years later, I would become the Senior Pastor of The Moody Church—a role I was blessed to fill for 36 years.

I had come to know Warren a few years before this, when I and two other pastors from the Chicago area would meet with him for prayer. Although the three of us felt in awe of Wiersbe, he always had time for us; he always made us feel as if we were the important ones in the room; it was never about him but always about us. How I still remember him closing his books on his desk when we entered, sitting back, welcoming us, eager to discuss how our ministries were doing. We talked about the challenges of the city, the challenges of shepherding people, and the pressures of time for sermon preparation, etc. Then we would find some hidden room in the church and intercede for the needs of the city and the great need for a revival such as was experienced during the ministry of D.L. Moody.

Wiersbe was a master at connecting with people; with a quick wit and a gift of remembering names, he kept up with what was happening in his congregation. Back in his day, the Sunday evening services were still quite well attended. He would walk down a half hour before the service began to shake hands, ask questions, and find out what the needs of the congregation were. “I can do much of my pastoring by just showing up before the service, meeting people, and finding out what happened this week,” he told me. He and his wife, Betty (who suffered a stroke several years ago and is confined to a wheelchair), were especially interested in the welfare of The Moody Church’s missionaries. The two of them kept up with the missionary families and knew what each was doing and where they were serving; they also knew the names of missionaries’ children and prayed for them regularly. As our paths crossed in subsequent years, Warren always assured me that he and Betty regularly prayed for me and the continuing ministry of The Moody Church.

Dr. Wiersbe left his library of about 14,000 books to Cedarville University. These books will be housed at Cedarville’s Warren and Betty Wiersbe Library and Reading Room. And, you will be gratified to know that a Cedarville student and long-time member of The Moody Church, Emily Pitts, will be spending this summer cataloging more than 360 of his sermons recorded while here at The Moody Church. Each message will be accompanied with a one-paragraph description and a list of topics covered. All of these messages will be available on our Moody Church Media website (MoodyMedia.org) this fall. This is just one more way the legacy of Warren Wiersbe will continue for generations to come.

When my autobiography was completed Dr. Wiersbe wrote a gracious foreword. In one paragraph he wrote, “It’s not an easy road, but if the Lord has called us and put us where we are, He will see to it that we will know His will and accomplish it no matter how impossible it might seem.”

No, it is not an easy road, but for my friend Warren Wiersbe, the road on Earth has ended and an eternal journey has begun. I have no doubt that he has already heard “Well done good and faithful servant … enter into the joy of thy Lord.”

And for us on Earth his legacy continues.