Resources About History of The Moody Church

“The Moody Church is a trusted place where anyone can connect with God and others” is what we call our Moody Church promise. These simple words have helped us explain … See More >

With Rhyme and Reason: A Word Portrait of Avis B. Christiansen Many a lost soul has been won to the Lord by wandering over the cobblestones of memory’s lane and hearing again the sweet hymns of the church. When the roll is finally called up yonder, Avis B. Christiansen will find stars in her crown never dreamed of. As poetess and hymn writer, her inspired words have brought easing of pain to broken hearts and, through the Holy Spirit, helped to work the miracle of salvation in many others. Mrs. Christiansen has both the rhyme and the reason for expressing … Read More >

Our Relation To Other Churches - Part 2

In the February issue of this paper, under this same caption, I tried to show the origin of our church. Who cares to know his church ancestry will find it in this former article, where it is shown that the North Market Hall Sunday School grew into an independent church as naturally and inevitably as boys grow into men. It is true that our church in its governmental relations is wholly independent of any and all other organizations, but this was simply an incident as shown in the former narrative. It is not true, never was, and never will be … Read More >

Life Story – Harry Ironside Never formally ordained, to many he’s the unofficial archbishop of American fundamentalism. With no classroom education beyond grammar school, he’s considered one of the leading biblical scholars of this generation—holds a doctor of literature degree from the largest liberal arts college in Illinois—and is the author of more than 40 wide-selling books and commentaries. With no previous pastoral experience, he stepped into the largest fundamental pulpit in the U.S., and for 14 years he has filled the vast auditorium as no other man can, with only two Sundays in that period passing without at … Read More >

The time for open air work has come. Are you ready for it? The Bible you love is an open air book. The great revival under Ezra began in the open air, as from his pulpit of wood he read the Scriptures and expounded their meaning. The angels gave a snatch of heaven’s music and announced the birth of Jesus to the shepherds in the open air. Christ preached His greatest sermon in the open air and proclaimed the gospel to the woman by Jacob’s well in the open air. Most of His miracles and teaching took place in the … Read More >

Written in honor of Dr. Ironside’s tenth anniversary as Pastor of The Moody Church. We fully appreciate the problems which confront us when we attempt to write at least a portion of the life story of one who is still living and actively engaged in the ministry to which God has called him. On the other hand, because there is so much of real value in the life and ministry of this devoted servant of Christ that will be a source of real inspiration to multitudes, it is without apology that we pen these lines. When approached and urged to … Read More >

A Brief Sketch of William Whiting Borden by Beulah Bishop An unusual man, William Whiting Borden was born to material wealth; was naturally endowed with exceptional gifts—great mental powers, rare qualities of character, and vigorous physical strength. His future in any field of endeavor would have been promising. But it was as a very young boy (seven years of age) that he stood during a life-consecration service in The Moody Church. He was very young—and he stood a long time—this little boy in a blue sailor suit; but from the decision made then, Borden was never to waver. That decision … Read More >

Our Relation To Other Churches - Part 1

It were well for every domestic household to know its own family genealogy. The Moody Church ought to be much more familiar than it is with its genesis. The few historical sketches of the church found here and there are necessarily so brief, so fragmentary and incomplete as to be little more than misleading. It is no marvel that Christian men and women outside our flock should be interested to know our relationship to the churches about us. Our own membership should be able without confusion to give intelligently this information. D.L. Moody in his mature years was without … Read More >

A Light To The City, A Heart For The World 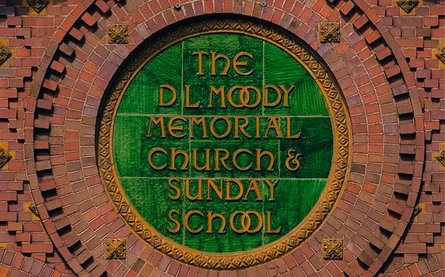