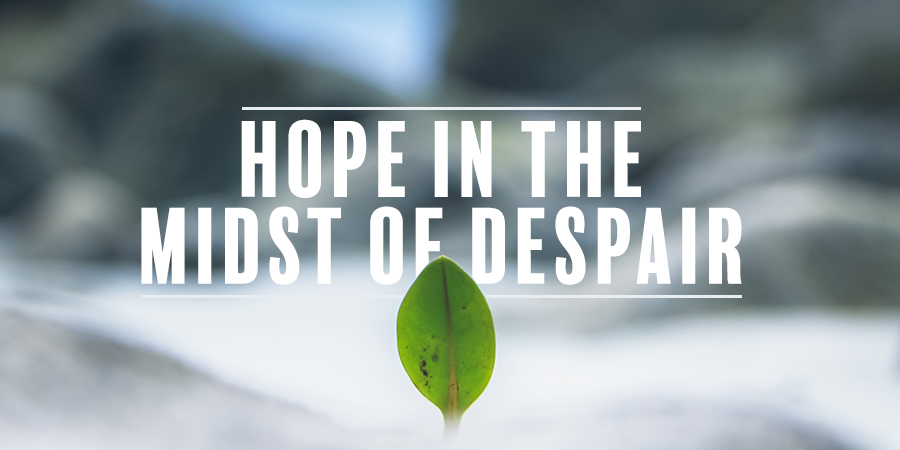 Hope In The Midst Of Despair

Those are the words of Sir Winston Churchill to Billy Graham when they met after Graham’s 1954 Greater London Crusade. Churchill opined that the headlines were filled with murder and the possibility of war; Communism, he said, might conquer the world. Then he asked more personally, “I am a man without hope…do you have any real hope?[i]

That’s the question everyone is asking: Do we have real hope?

If COVID-19 has taught us anything, it’s that we can’t predict the future. Who would have dreamed that a virus would be so contagious that it would kill tens of thousands around the world and result in our economy being shut down? Professional sporting events halted. Restaurants and businesses closed. Airlines grounded. Millions unemployed. There are as many dire situations as there are people reading this blog

We need a hope that can withstand setbacks, personal losses, and unanswered prayers. We need a hope that endures when the pain is unending and the future progressively darker. “Trusting God” does not mean things will be better. Just ask Jesus as He agonized in Gethsemane.

So what is the basis of our hope? Hope in the Bible is not “I hope everything will turn out okay, but I’m unsure.” Scriptural hope is “confident expectation.” It means we have something to look forward to; and it is something that we can depend on.

Let’s meditate on the promise that we “might have strong encouragement to hold fast to the hope set before us. We have this as a sure and steadfast anchor of the soul, a hope that enters into the inner place behind the curtain, where Jesus has gone as a forerunner on our behalf, having become a high priest forever after the order of Melchizedek” (Hebrews 6:18–20).

Here hope is described as a refuge disconnected from circumstances. It’s impervious to the stock market or even our own health, important as those things may be. It is unaffected by tonight’s news or tomorrow’s headlines. This doesn’t mean that when we flee to this refuge all of our worries will be gone; peace is a gift that has to be accepted, but it also has to be won. Even as we flee to our refuge, we may still fret. But we also learn that we have an invisible friend who has gone before us and meets with us in the secret place.

Hope doesn’t guarantee life will get easier; hope is the assurance that God will be with us whether it gets easier or not. Hope doesn’t mean we will be healed; hope means that God is with us in our sickness and even in death. Hope doesn’t promise a change in circumstances; it promises a change of heart. God has deliberately made it difficult to believe so that we might prove our faith which is best demonstrated not when things are going well, but when they are going unwell.

Biblical hope looks beyond this life to our forerunner “behind the curtain.” We look to Jesus who has seen it all, endured it all, and won it all. And now He cheers us on as both our Companion and Intercessor. Why did He run His race? He did it for the “joy” set before Him. No joy in Gethsemane; no joy being whipped; no joy on the cross—but He endured by looking beyond the present to the future.

On the morning of July 4, 1952, Francis Chadwick waded into the water on Catalina Island and began swimming toward the coast of California. She wanted to be the first woman to swim the 21-mile strait, but the fog was so thick that she could hardly see the boats in her own party. More than fifteen hours later, her mother and her trainer, in a boat alongside her, urged her to go on. But Francis said she simply could not and so was taken out of the water. Moments later when she saw that she was within a half mile from the shore, she said, “If I could have seen the shore, I might have made it.” Two months later, despite heavy fog, she made it and said, “As I swam I kept the shoreline in mind.”

Let’s agree to look beyond the fog to the shore. The journey may be treacherous, but our destination is sure. Darkness comes before light, and resurrection after crucifixion. Like our Master, we run the race with an eternal goal in mind.

Billy Graham took out his New Testament and explained to Churchill that he too could have hope, but he had to look beyond the London headlines to Christ. Just so, let us watch the news tonight to get caught up on what’s going on in the world, but if we want real hope, we have to look beyond this world to the next.

Jesus waits for us behind the curtain and assures us that with His help, we can make it.