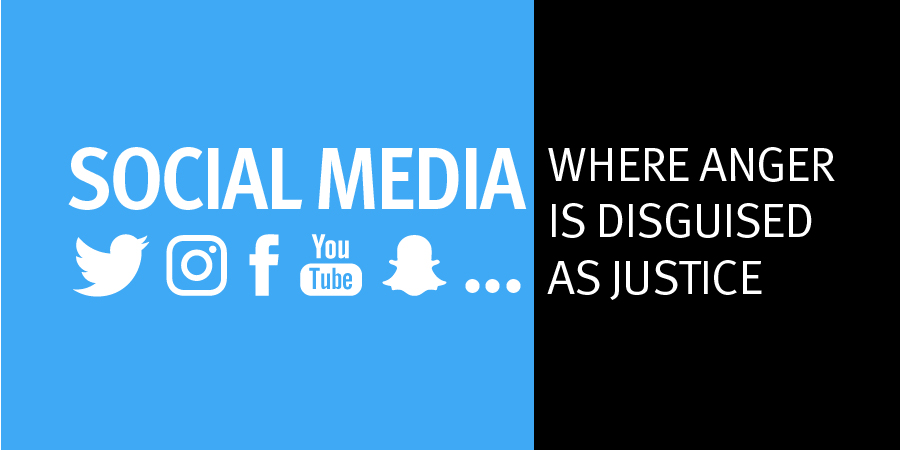 Social Media: Where Anger is Disguised as Justice

I am grieved at the way in which social media is being used (or rather misused) in today’s overheated and angry culture. Christians are falling into the snare of sniping at each other in ungodly ways, all “for the sake of truth.” I am reminded of Paul’s words in Galatians, “….through love serve one another … But if you bite and devour one another, watch out that you are not consumed by one another.” (Galatians 5:13b, 15). Yes, we now have a platform where we can, if we wish, bite and devour others.

A friend of mine, a professor at a Christian institution, told me that someone (I know not who) wrote on Twitter that my friend disagreed with his superiors over how to handle a certain situation.  My friend had two comments. He told me that the statement about him was categorically untrue and wondered where this social media enthusiast got his information. And secondly, even if it were true, why was it online? Is it not possible to have a private disagreement with a friend or colleague? Does everything have to be online in the interest of transparency and truth?

Of course there are some responsible bloggers, but as I read some blogs and comments written by some Christians about others, I have noticed the following: First, the perceived fault being exposed is often exaggerated and put into the worst possible light. Few seem to be willing to give a fellow believer the benefit of the doubt. Responses come in attack mode, with inflated comments, embellishments, and distortion. As fallen creatures, all of us—myself included—are more prone to believe the worst about others rather than to believe the best. Of that, let us all repent.

Second, I often find very little charity; instead, I see anger and self-righteous rhetoric with little concern about any reconciliation or love which might “cover a multitude of sins.” I’ve noticed that when people are angry or hurt, there are usually no checks and balances, no desire to keep matters proportionate and in proper context or perspective. The sniping and accusations among Christians after the 2016 election made me wonder whether we had forgotten that our true identity was in Christ rather than how we voted. We forgot that we are citizens of a much greater Kingdom.

The self-righteousness on the part of some on social media should drive us to our knees, pleading with God on their behalf even as we warn ourselves about falling into the same trap. Many online tend to pontificate with an air of self-assurance as if they have a privileged position to know all the facts about a person or a situation and are called by God to make the crooked paths straight. These self-appointed judges want “those in the wrong” to confess that they (and their judgments) are completely right. This is a long way from Paul’s admonition, “Brothers, if anyone is caught in any transgression, you who are spiritual should restore him in a spirit of gentleness. Keep watch on yourself, lest you too be tempted” (Galatians 6:1).

Is there a place for exposing facts and situations for the wider Christian world? I think there is, but I suggest the following guidelines going forward. Before you write about a fellow brother or sister online, ask yourself the following questions:

My plea to my fellow believers: Let’s dial down the rhetoric. Let’s not tell ourselves that all the faults of others should be exposed; let’s not write about each other out of a spirit of revenge or anger. Let us believe the best about each other and be reluctant to believe the worst. Let’s treat others the way we would want them to treat us.

Long before the rise of social media Paul wrote, “Let no corrupting talk come out of your mouths, but only such as is good for building up, as fits the occasion, that it may give grace to those who hear” (Ephesians 4:29).

Those are words this generation needs to hear.