Is It Scriptural To Have Various Church Denominations?

A modern reality of Christianity is the presence of denominations. Around the world, churches bear the names of historical figures and movements which shaped the theology and practice of that particular church. In the past number of years, the tide of Christian opinion has been turning against denominationalism. Non-denominational and independent churches are the norm in many cities. As Christians who are to desire unity (1 Peter 3:8), how should we understand and respond to this situation?

First, we need to admit that denominations often create unnecessary divisions between Christians. But all division is not troublesome. Among the early church, some misguided “Christians” were teaching that Jesus was less than God. The Apostles and their disciples responded to such heresies and therefore created a necessary division between actual Christians and those who only claimed to be Christians (1 Corinthians 11:18).

The next feature of denominationalism is the protection of special church culture or doctrines. Over time, churches develop certain traditions and practices that distinguish their forms of worship from other churches. Some churches use an altar call, and some do not; some use a different mode of baptism. The examples are beyond number. Denominations preserve these aspects, for better or worse, and non-denominational churches also hold onto their own patterns and traditions.

Denominationalism also serves a cooperative function by funding missionaries and special projects. While an individual church might not be able to support missionaries, joining with other like-minded churches can result in a larger vision and mission. Denominational ties can assist in these endeavors.

Structured leadership is a common feature of many denominations. This can provide increased accountability and interaction between church pastors. Financial and doctrinal errors can theoretically be more easily identified and remedied.

Many churches today are non-denominational or independent of any official connection with other churches. The Moody Church was founded as an independent church in 1864 under the leadership of D.L. Moody, and has retained its independent status. As such, though it has no formal ties with a denomination, we do partner with other churches and ministries whose goals and aspirations are in line with our doctrine and mission. All those who serve at The Moody Church are accountable to the elder board whose members are elected by our congregation at its annual meeting. 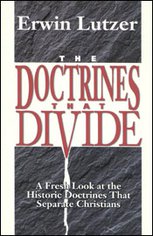