The Bible: Canon, Inerrancy And Authorship

What is the canon?

The biblical canon (meaning rule or standard) is the revealed Word of God—the 66 books of the Old and New Testaments. As Protestants, we believe that the canon of the early church was comprised of 39 books in the Old Testament and eventually 27 in the New Testament. While books from the Apocrypha might be of limited benefit for Christian reading, they are not God’s Word, and the Jewish people and the early Christian community never considered them as having the same weight as the accepted Scriptures.

Do you believe in the inerrancy of Scripture?

Yes, the Word of God is true and free from error. The original manuscripts (autographs), as recorded by the Spirit-superintended authors, were inerrant. They do not survive today, but this does not mean that our Bible is unreliable. With the plethora of ancient copies produced by skilled scribes, lower textual criticism can determine the original texts with remarkable accuracy. But we must not extend the concept of inerrancy to our modern translations and texts, though the vast majority of modern texts are faithful translations of the original languages. Properly interpreted, the Scriptures have authority over us both in matters of faith and practice.

How is the Bible both the Word of God and the work of man?

The Holy Spirit superintended the writings of Scripture, producing a truly divine, flawless work (2 Timothy 3:16; 2 Peter 1:20-21). The human authors’ styles and methods have been preserved by the grace of God. Like Christ Himself, the Bible is both human and divine, thus both might properly be called The Word of God. Just as Jesus was both God and man, so the Scriptures have dual authorship. 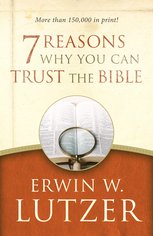 Seven Reasons Why You Can Trust The Bible (Book)