Why You Should Get to Know D.L. Moody …and what he would say to us today

Someone said these words:

He dropped out of school when he was 13, but inspired students at Cambridge University in England, and founded an internationally known school and church.

He once preferred to teach only children, because he was uncomfortable with adults due to his lack of education, but ended up being one of the most persuasive orators of his day.

He was born on a remote farm in rural Massachusetts, but became famous for conquering whole cities for Christ. He was in love with money, but ended up changing his priorities to live in austere conditions so that more money could go for the spread of the Gospel.

The older I get the more amazed I am at the life and ministry of D.L. Moody. As our church prepares to celebrate our 150th anniversary in 2014, I am reminded that he was indeed one of most unlikely candidates that God would use so mightily. He was an impulsive man, as one writer put it, “he had the rough humanity of the Apostle Peter, the strategic skill and heartiness of the Apostle Paul, and the love and steady growth of the Apostle John.”

He was born in 1837, into a poverty-stricken Massachusetts home to a devout mother and alcoholic father. He was led to faith in Christ by a faithful Sunday school teacher, Edward Kimball, when he was 17 years old. He came to Chicago with the intention of becoming a wealthy businessman, but also began a Sunday school in the poorest, most crime-ridden area of the city. In that needy environment he discovered that leading children to faith in Christ was more rewarding than making money.

Moody, building on the foundation of evangelists such as Whitfield and Finney, held great crusades and passionately preached the Gospel. Newspaper writers were puzzled as to why this man, whose bad grammar reflected his grade four education, could fill great halls with tens of thousands of people night after night. Nevertheless, the front pages of their morning newspapers often carried his sermon delivered the night before.

His life illustrates the necessity of completely yielding to God. While in England he heard evangelist Henry Varley say, “The world has yet to see what God can do through a man who is totally yielded to Him.” Moody was captivated by these words and resolved, “By the Grace of God, I will be that man!”

When he died on December 22, 1899, the thousands who gathered for his funeral were told:

Though he made no inventions and had no discoveries, though he wrote no poems, painted no pictures, and led no triumphant armies, this unlettered son of a poor woman in New England … made an impression on the world that this dying century has seldom seen.

That “impression” is still with us today. Among his many legacies is the founding of The Moody Church in 1864, and the Moody Bible Institute in 1886.

I invite you to rejoice with us as we celebrate the 150th year of The Moody Church’s ministry in the city of Chicago. The entire Christian world owes a debt to this man who proved that it is not great ability but great availability that really matters to God!

Moody: A Man for Our Times

What would Moody say to us today as we celebrate the 150th anniversary of the church he founded?

He would tell us that social work is necessary; in fact, he combined the gospel with a social emphasis in a way that was unique for his time. However—and this is important—he would go on to say that the preaching of the gospel must always come first. And, I believe if he were alive today, he would be pleased to know that The Moody Church has consciously maintained that emphasis.

He would also remind us that the gospel is for everyone, regardless of their background and their sin. When he began the Illinois Street Church in 1864 (which would later become The Moody Church), he hung a sign outside the door that proclaimed, “Ever welcome to this house of God are strangers and the poor.”

I am pleased to say that although the original sign is long gone, a similar sign still greets visitors when they enter The Moody Church today. Throughout its 150-year history, The Moody Church has emphasized the need to reach out to all who feel left out of society or cut off from God, whether by poverty, ethnicity, or any other factor. The church has provided practical help of all kinds to numerous people both here in the city of Chicago, and around the world. A hundred and fifty years after the church was founded, we are still “Celebrating the Joy of Changed Lives.”

To catch a glimpse of Moody’s heart for the gospel and his passion for the lost, we’ve reprinted a part of one of his sermons. When he preached, he aimed directly at the human heart. Imagine him preaching with animation, and with the help of a vivid imagination. Even in the following short paragraph we can feel the passion and urgency with which he spoke.

I can imagine when Christ said to that little band around Him, ‘Go ye into all the world and preach the Gospel,’ Peter said, ‘Lord, do you really mean that we’re to go back to Jerusalem and preach the Gospel to those men who murdered You?’ ‘Yes,’ said Christ, ‘Go! Hunt up that man that spat in my face, tell him he may still have a seat in My Kingdom yet, if he repents. Yes, Peter, go find that man that made that cruel crown of thorns placed on my brow, and tell him I will have a crown ready for him when he comes into My Kingdom, and there will be no thorns in it. Hunt up that man that took a reed and brought it down over the cruel thorns, driving them into My brow, and tell him that I will put a scepter in his hand and he shall rule over the nations of the earth with me if he will accept salvation. Search for the man that drove the spear into My side, and tell him that there is a nearer way to My heart than that. Tell him I forgive him freely, and that he can be saved if he will accept salvation as a gift.

May God give us the heart and the passion of the man who had one aim, and that is to glorify God in sharing the Good News Jesus came to bring us. As we approach our anniversary we are reminded of Moody’s favorite verse, “He who does the will of God abides forever.” 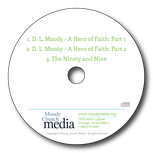