How to Witness to a Muslim

You don’t have to cross an ocean to witness to Muslims. There are at least four million Muslims in America, and their numbers are growing.

The fact is that most Muslims in America are open to talking about their religion, and willing to engage us regarding Christianity, if only we show them respect and true friendship. Just as we would resent those who would demean our religion, so they resent those who approach them with an attitude of superiority or condemnation. Love opens the door to dialogue and understanding.

But how should we present Christ to them? Muslims have a high regard for Jesus; they honor Him as one of the greatest prophets. But when we tell them that Jesus was the “Son of God,” they think this means that God had a sexual relationship with Mary. Thus they scorn the doctrine of the Sonship of Jesus.

So rather than get into an argument about the Sonship of Jesus, or even His deity, a better way to present the Gospel is this:

First, explain that you have been studying the Koran, particularly in light of the terrorist attacks on the U.S., and you know that the majority of Muslims do not believe in violence. They need to know that you are not prejudging their attitudes and beliefs.

Next, tell them you have discovered that in the Koran, Jesus is presented as the One who did great miracles, including the raising of the dead (Sura 19:25). He is also presented as sinless (Sura 19:19), and as born of a virgin. Informed Muslims will be gratified to know that you are knowledgeable about their book, and will affirm that indeed Jesus was a great prophet. You might also respectfully point out that the Koran does not record that Mohammed performed such miracles, and that he had to ask for forgiveness for his own sin.

Then say that there are only two things mentioned in the Bible which are not in the Koran, which if a Muslim were to believe, he would join you in heaven. At that point, the Muslims I’ve encountered are both appreciative and curious, waiting to find out what those two facts might be.

The two facts are that (1) Jesus died on the cross for our sins; and (2) He rose from the dead and then ascended into heaven.

At this point, the Muslim will begin to ask questions or explain why he has difficulty believing these two doctrines. Don’t argue, but defend the uniqueness of Jesus in this way: Point out that when there is a breach of fellowship between two people, a mediator is necessary to bring them together. If you needed to be reconciled to the President, you would have to have someone as great as the President to represent him. And if we want to be reconciled to a holy God, we need someone qualified to bring us together; someone who is as great as God Himself. Thus Jesus, who was born of a virgin and without sin, is uniquely qualified to be our Savior and Mediator. Point out that we believe in a spiritual trinity, not a physical one.

This approach bypasses the opposition that normally arises when we speak of Jesus as the Son of God. Of course, should a Muslim seek to accept Jesus as Savior, he will have to grapple with this doctrine. But initially we just want him to see Jesus in a new light, to see why we believe that there is none like Jesus, and why He deserves our interest and adoration. As friendships are nurtured, the Truth of the Gospel will be more thoughtfully received.

Finally, the more we know about Islam, the more our Muslim friends will respect us and our viewpoint. That is why we urge you to purchase one of the books listed in this edition of the Moody Church Radio News. Muslims need to know that we have taken the time to know them and their beliefs.

Surely there has never been a time in America when there have been as many opportunities to reach out to our Muslim friends as today. Did not Jesus tell us we would be witnesses to all nations? Those nations are now at our doorstep, brought here by God to hear the wonderful message. Let’s not bypass such a God-given opportunity.

We asked Pastor Lutzer several questions many people have been asking lately about Islam. Here are his answers, with our prayer that they will be helpful to you.

Q: We know that the Koran makes many references to both the Old Testament and the New Testament. What is its origin?

A: The Koran was not written by Mohammed (AD 570-632), since the Koran itself states that he was not able to read or write. However, he would enter into a trance, and then what he said was recorded by his followers. These scattered remarks were collected and arranged into 114 Suras (chapters). Since the Koran follows no chronology, and since subjects are not grouped together, reading it is a very difficult and challenging assignment.

In the process, biblical stories and information were interwoven with various historical and Biblical allusions. Unfortunately, however, the Koran contradicts the Bible at several points. For example, Abraham is said to have offered up Ishmael, not Isaac, on Mount Moriah. And Miriam, the sister of Moses, is confused with Mary, the mother of Jesus. Also, according to the Koran, Jesus was not actually crucified.

Devoted Muslims believe that the text of the Koran was written in perfect Arabic because it was written in heaven. However, some Arabic scholars dispute this for various reasons, adding that some of the original verses are missing.

Q: We hear much on the news about the Islamic faith being a “peaceful religion.” Is this so?

A: Thankfully, the vast majority of Muslims do not condone violence such as we saw in the terrorist attacks. They point out that the Koran says that we must live in peace with Christians and Jews. Also, the Koran states that a curse is upon those who kill the innocent.

We must, however, balance these statements with many in the Koran that affirm the need for a Jihad (Holy War) against infidels who are not true worshippers of Allah. As for the passages which put a curse on those who kill the innocent, we must remember that for radical Muslims we are not innocent, but very guilty of idolatry and disrespect for Allah.

Q: Would it be true to say that, on the whole, the Muslim religion is intolerant of freedom?

A: A good question.

Of the 20 or so Islamic countries in the world, none guarantee freedom of religion. A Muslim cannot convert to another religion without reprisals, prison or death. In centuries past, Islam was spread by the sword, and the teaching that every country of the world must be converted into Islam is widespread.

I’m also told that moderate Muslims can often be converted into radical Muslims by leaders who say that the “tolerant” passages in the Koran are not relevant, since they represent the early part of Mohammed’s life, when he was more friendly with Christians and Jews. Tolerance, therefore, is applicable only when the Muslim faith is not powerful enough to overcome such infidels.

Five years ago in the country of Jordan, I asked a 22-year-old tour guide, “If you had enough weapons to win a war against the United States, would you force us to convert to Islam?”

He answered, “We would have no choice… we are commanded to make every country Muslim, to restore the worship of Allah.”

Q: What, then, should our attitude be toward the Muslims who live among us?

A: As Christians, we love and respect them as people. Nor should we prejudge them, for here in the U.S. many Muslims adopt the same appreciation for freedom as the rest of us. Many of them were deeply grieved by the terrorist attacks and have felt that everyone is against them. We must love them, befriend them, and assure them that we regard them as personal friends.

Q: Is Allah just a different name for the Christian God, Jehovah?

A: In the Koran, Allah has many of the same attributes as God Jehovah. For example, he is all powerful, knows all things, etc. However, Muslims themselves believe that Christians worship three gods, and thus we are seen as idolaters.

That said, those who translate the Bible into Arabic must use the word “Allah” for God, since no other word for God exists in the Arabic language. Those who read the Scriptures in Arabic will invest the word “Allah” with new meaning as they understand the Judeo-Christian teaching.

(For more information, consult the book, The Islamic Invasion, offered in this edition of the Moody Church Radio News.)

Q: Is it realistic to think that Muslims can be converted to Christ?

A: The answer is yes. Here at the Moody Church, we have had several Muslims convert to Christianity through our Iranian ministry. The love of Christ can enable them to give Christianity a fair hearing. As the Spirit shows them the truth, they come to faith in Christ as the sole Savior of the World. 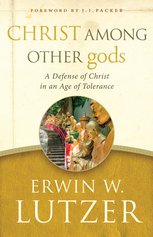 Christ Among Other gods (Book)