The Bible not only presents divine ideals but also sin-caused realities. In the Old Testament, divorce and remarriage were permitted under specific regulations. The question is whether or not any of these guidelines are applicable today within the context of the New Testament. Two instances demonstrate that divorce can, under certain conditions, be considered scriptural today.  1. When One Partner Develops a Pattern of Sexual Immorality Christ said, “And I say to you: whoever divorces his wife, except for sexual immorality, (fornication) and marries another, commits adultery” (Matthew 19:9).  Several observations should be noted: (1) A spouse … Read More >

The Old Testament institutes tithing as an obligatory act of worship by God’s people. Israelite tithes supported the landless tribe of Levi and the priesthood of God (Numbers 18:25-32, Nehemiah 10:38). They also served the giver’s family and the nation’s disadvantaged (Deuteronomy 14:22-29).  This command of God was often abused or ignored (Malachi 3:8-10). As in the case with all visible acts of worship, self-righteousness cropped up among the Israelites who actually did tithe (Luke 18:12). Through the fulfilling work of the Messiah, New Testament believers are no longer obligated to perform the particulars … Read More >

Throughout the world, many have described personal visions and near-death experiences, including conversations with Jesus, meetings with deceased loved ones, and even tours of heaven or hell. Such experiences are possible, but subject to deception and wishful delusions.  God did utilize visions in the Old Testament (Genesis 46:2; Numbers 12:6, 24:16; Psalm 89:19; Daniel 7:1-15; Isaiah 6:1-8), and the New Testament is abundant with examples as well (Acts 11:5, 16:9, 18:9; 2 Corinthians 12:1-4). The prophet Joel even speaks of the expanding frequency of visions in relation to the … Read More >

The Mystery Of The Baby 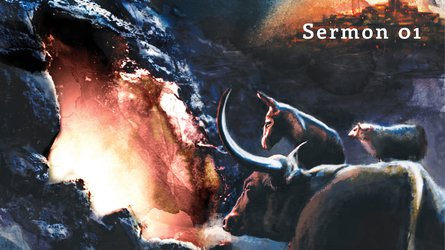 God had to come to us because the extent of our predicament demanded divine intervention.

Thoughts for the Quiet Hour - April 7 We came unto the land whither thou sentest us…we saw the children of Anak there. —Numbers 13:27, 28. It is when we are in the way of duty that we find giants. It was when Israel was going forward that the giants appeared. When they turned back into the wilderness they found none. —Selected Read More >

A Prayer for God’s Favor

“The LORD spoke to Moses, saying, ‘Speak to Aaron and his sons, saying, Thus you shall bless the people of Israel: you shall say to them: The LORD bless you and keep you; The LORD make his face to shine upon you and be gracious to you; The LORD lift up his countenance upon you and give you peace. So shall they put my name upon the people of Israel, and I will bless them.”—Numbers 6:22-27  What a difference “face time” makes! Today in business, networking by using Skype is preferable to connecting by telephone because you … Read More >

Are There Generational Sins And Curses?

God’s holiness is unmatched. He responds to sin not only with grace, but also with holy judgment. When we observe the nature of sin and punishment in the Old Testament, the prophets record that God treats sin harshly. Sin affects more than merely the perpetrator, it spills over into the community, especially the family. Thus, God speaks of visiting and punishing sins to the third and fourth generation (Exodus 20:5, Numbers 14:18, Lamentations 5:7). Achan and his family’s punishment is one extraordinary example of God’s tenacity for purity, but it should not be considered as a normal … Read More >

The Gospel Of The Grace Of God

An address by Dr. Herbert W. Bieber at The Moody Church during the first week of the opening of the new church building in 1925. I have with a great deal of thought chosen my subjects for these three nights. I suppose you believe with me that there are favorite sugar sticks that we Bible teachers like to suck, but I want to bring you messages from the Word of God which I believe would be helpful. My own desire is that in this magnificent church there shall never anything be preached but the gospel of the grace of God … Read More >

Thoughts for the Quiet Hour - February 14 At the commandment of the LORD they rested in the tents, and at the commandment of the LORD they journeyed. —Numbers 9:23 This is the secret of peace and calm elevation. If an Israelite, in the desert, had taken it into his head to make some movement independent of Jehovah; if he took it upon him to move when the crowd was at rest, or to halt while the crowd was moving, we can easily see what the result would have been. And so it will ever be with us. If … Read More >