The older we become, the more difficult it is for us to face changes. We get our roots down deep and we don’t like them to be disturbed. The new fashions, the new ideas, and even new friends are a bit of a threat to us. We’re very comfortable in our own little world, and we see no reason why anything has to change.

But you and I know that life just doesn’t stand still. Where there is life there must be growth, and where there is growth there must be change. The only things that stand still are things that are dead. Change is a part of life, and you and I must know how to face change and profit from it. God is shaking things today—it seems like the very foundations of the world are being moved. Hebrews 12:27 tells us why God permits the world to be shaken “That those things which cannot be shaken may remain.”

The Book of Hebrews was written to a group of believers who were having a struggle with change. These were Jewish believers, and they were accustomed to the sacrifices and ceremonies of the Old Testament law. But now they were Christians, and everything had changed. Instead of worshipping in a man-made temple, they worshipped God in every place. Their bodies were the temple of God. There was no more need for sacrifices because Jesus Christ had offered one final sacrifice forever and completely settled the sin question. They needed no priests on Earth because they had a high priest in heaven. And there was no need for a law written on tables of stone because God had written His law on their hearts.

But persecution broke out and it became very difficult to be a dedicated Christian. Some of these Jewish believers were tempted to go back to their old faith’ but the Book of Hebrews urges them, not to go back, but to go on in maturity. Everything they had in Christ was far better than what they had in their former religion. How could they sacrifice their faith just because it was costing them to live for Christ? You see, the changes that were going on were upsetting them. They were living at a time when the ages were colliding with each other, a time of transition such as we have today. And times of transition are always difficult times.

I think we have here the first key to peace and victory in times of change, and it is this: look upon changes as an opportunity to grow. I realize only too well that the older we get, the harder it is for us to grow; but if we don’t grow, we die. No matter how old you are, my friend, there is always room for more growth. We need to grow intellectually and learn new things; we need to grow emotionally; we need especially to grow spiritually. To be sure, we enjoy the comfort and safety of our own little nest; but God sometimes shakes the nest and forces us to spread our wings and do some growing.

Perhaps the one area that most needs developing in our lives is the area of faith in God. And this is the very area that God wanted these Hebrew Christians to work on. Before they were saved, they had a religion of sight: a temple they could see, a priest they could touch, sacrifices they could see and even eat. But now as Christians, their spiritual values were in heaven: a high priest in heaven, a city in heaven, a mercy seat in heaven. It demanded faith to keep going day after day, faith in unseen, faith in the Word of God. Perhaps one reason you are going through a time of change is that God might help you grown and mature, and this makes it worth it all.

Yes we are living in difficult times of change. It seems like the very foundations of life are shaking. Hebrews 12:27 tells us one reason why God permits these social and political earthquakes: God is “removing the things that are shaken” that “those things which cannot be shaken may remain.” In other words, God permits changes to come to our lives to separate the scaffolding from the foundation.

I’m thinking of a friend of mine who seemed to be successful in business. He had a good job, security, a lovely home, and all the things that go with a moderate amount of success in life. But then one day he lost his job. This came as a shock to him because he was sure his job was secure until the day he retired. But the company was purchased by another firm and several of the top men were let go. I remember praying with him shortly after he was let go, and he confessed to me that for the first time in his life he was seriously examining his life to discover the things that really counted. God had shaken his life, and my friend was learning to separate the things that cannot be shaken from the things that cannot be kept.

God wants us to build on the bedrock and not on the shifting sands. You remember the story Jesus told of the two men and their houses—the one built on sand and the other on rock. Both were fine as long as the sun was shining; but when the storms came, the house built on the sand was washed away. This is one reason why God permits changes to come to our lives, to force us to examine our lives to see what is important and permanent. It is far better to be left with a few things that are going to last than to have many things that will only pass away.

Change is not a threat; change is an opportunity to grow, and change is an opportunity to discover what is really important in our lives. Don’t be afraid of change. Accept it from the hand of God and let Him work in your life according to His gracious will. And please keep in mind the fact that there are some things in life that never, never change.

God never changes. He says in Malachi 3:6, “I am the Lord; I change not.” Hebrews 13:6 says of Jesus Christ that He is “the same, yesterday, today and forever.” We have a God and a Savior that cannot change. If we build our lives on Jesus Christ, then we are building on the unchanging eternal Rock of Ages. And no matter how many storms may rage about us, nothing will be able to shake us from that eternal foundation.

God’s Word never changes. “Forever O Lord Thy word is settled in heaven” says Psalm 119:89. Men may try to change the Word of God, but it remains the same. Satan may question the Word and try to substitute his lies, but the Word stands. This is what Jesus meant in that parable of the two builders. The man who built on the rock was the man who heard Christ’s Word and obeyed it. When we obey the Word of God, we are building on the rock. When we disobey the Word, we are building on the shifting sands.

Too many people these days are depending on the scaffolding instead of the foundation. This explains why God is permitting the winds of change to blow. He doesn’t want our lives and our churches to be built on temporary things. If they are, they simply won’t last. The winds of change come along and they blow against our lives; and they blow down some of the props and crutches that we depend upon so so much. And you and I complain to God because some piece of precious scaffolding has been blown away, and God says, “You don’t need that piece of scaffolding. Don’t build your life on things that can be shaken. Build your life on the eternal things that cannot be shaken.”

If a Christian is in the will of God, living for the glory of God, then he can lose nothing that is really necessary to him. If we lose anything in the storms of life, it is because God knows we really don’t need it any more. The older we become, the harder it is for us to face change, and yet change is the very thing we need. If we don’t experience changes, we can never really grow. And apart from changes, we can’t separate the scaffolding of life from the basic foundations. My friend, build your life on the things that cannot be shaken. Build on the essentials, not the accidentals. Perhaps we all need to pray with the hymn writer: “Change and decay all around I see, O Thou Who changest not, abide with me.” 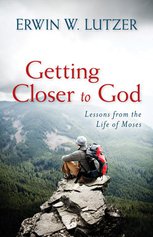 Getting Closer To God (Book)